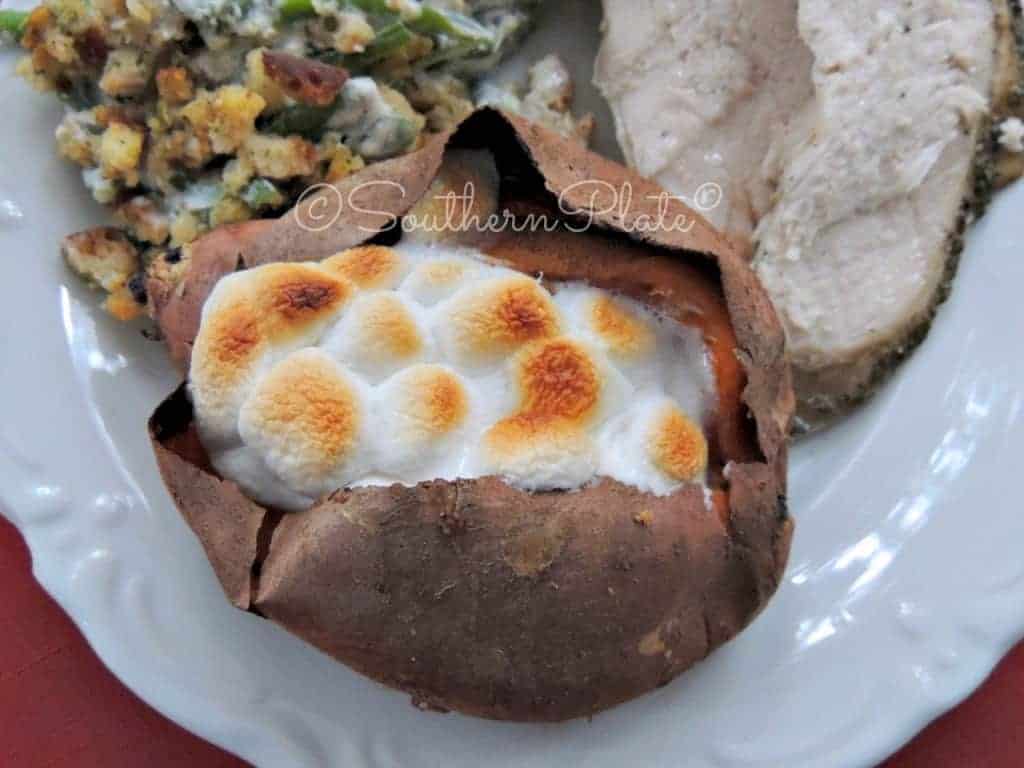 Whats not to love about a food that counts as a vegetable but tastes like a treat? Even without the sweetness of added toppings, I love me some sweet potato recipes! But then you go and add a pat of butter, spoonful of brown sugar, and sprinkling of marshmallows (cooked until puffed up and toasted(, and I’m in heaven.

The response to the photo of my baked sweet potato sitting next to my slow cooker turkey breast was overhwleming. I got emails, comments on facebook, and even had someone stop me in a store to say “Baked sweet potatoes recipe, making it for Thanksgiving!”

Now I’m not saying you ‘ve been baking them wrong. There are countless ways to bake a potato and I don’t consider any of them wrong. But I wanted to show you a foolproof way to bake a sweet potato that was perfectly done, soft, tender, and could fluff up well, without being overdone like they are sometimes prone to be when you order them in restaurants and such.

Should I Use Yams or Sweet Potatoes?

I prefer the rounder ones that fill up my palm like the picture above. Sometimes, though, all you can find are the skinny ones and if that is what you have, they’ll do just fine.

Some people (and stores) refer to these as yams, which is an entirely different vegetable altogether. You’d be hard pressed to find a true yam in the United States. Yams are from Africa and can grow up to three feet in length. They aren’t even related to the sweet potato but when Africans arrived (against their will) in the American South and saw the sweet potato could be cooked in the same manner as they cooked yams, that is what they began calling it, which makes perfect sense, and this caught on.

Why do I call it a sweet potato? Well, for two reasons. 1. That’s what it is. 2. That is what my mother called it.

Having said that, though, if you grew up calling them yams, keep on doing your thing. I asked this sweet potato in the photo if it minded being called a yam and it just sat there, not moving an inch. It doesn’t care. 😉

How to Make the Best Loaded Sweet Potato 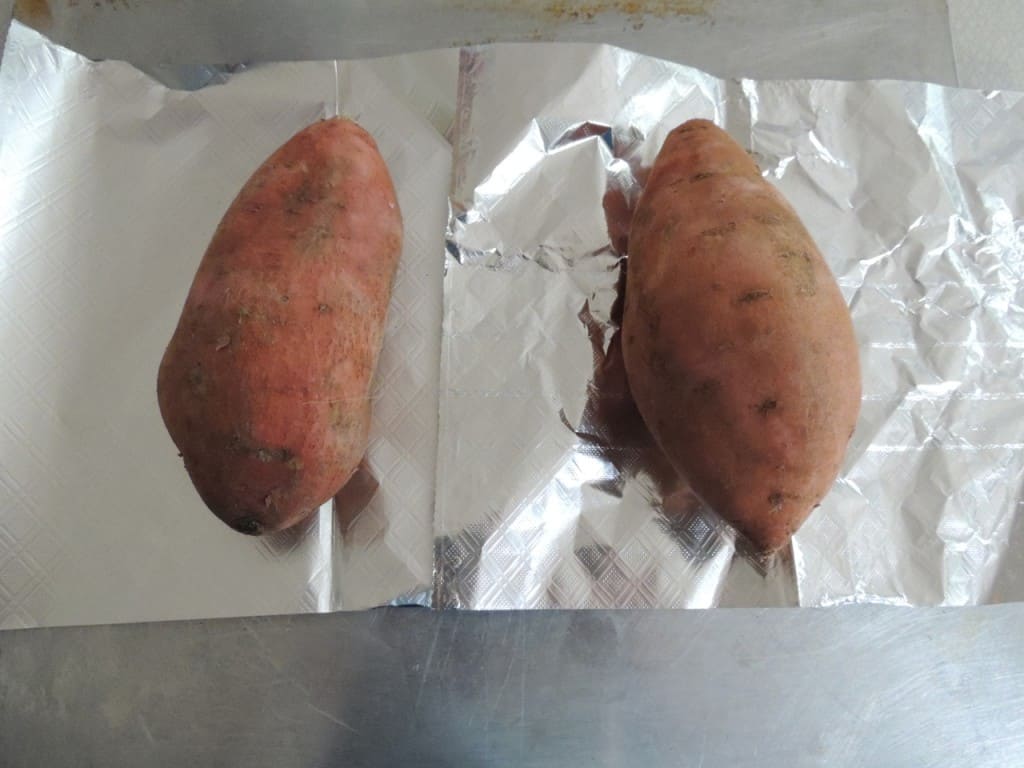 A Tip to Prevent More Mess

You can skip the aluminum foil if you want but it will mean some cleanup later as sweet potatoes often weep a sticky liquid onto your baking sheet while cooking.

Does My Cooking Time Change if I Add More Sweet Potatoes?

Nope, it shouldn’t.  I am baking just two here and if added more the cooking time doesn’t change. 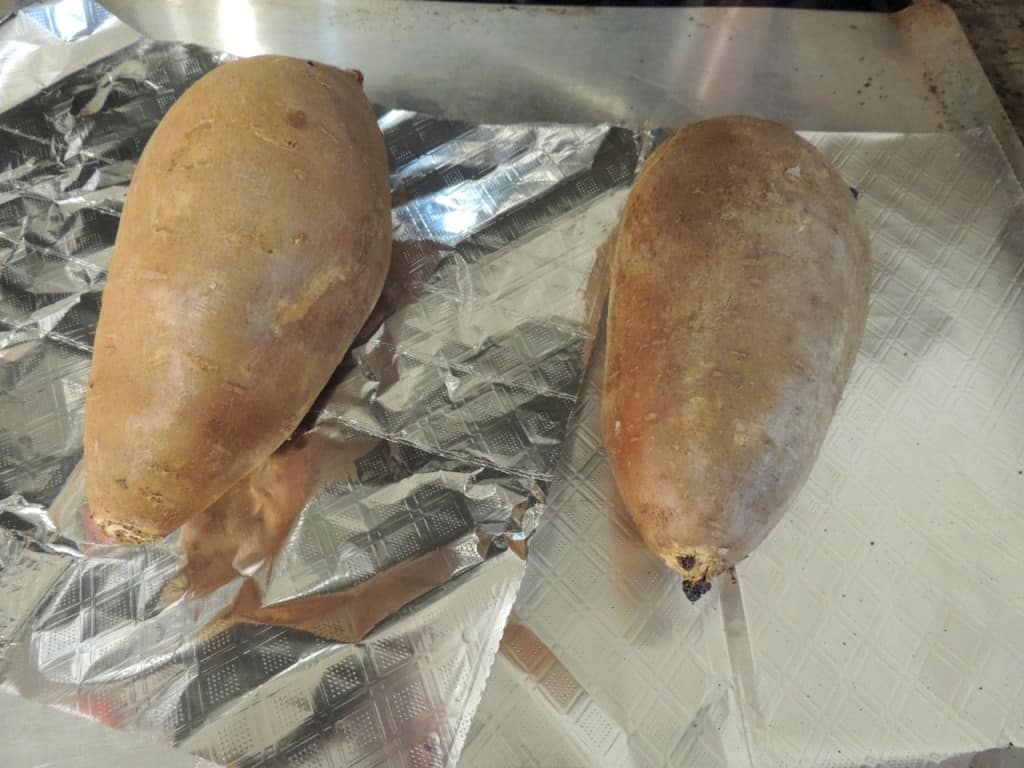 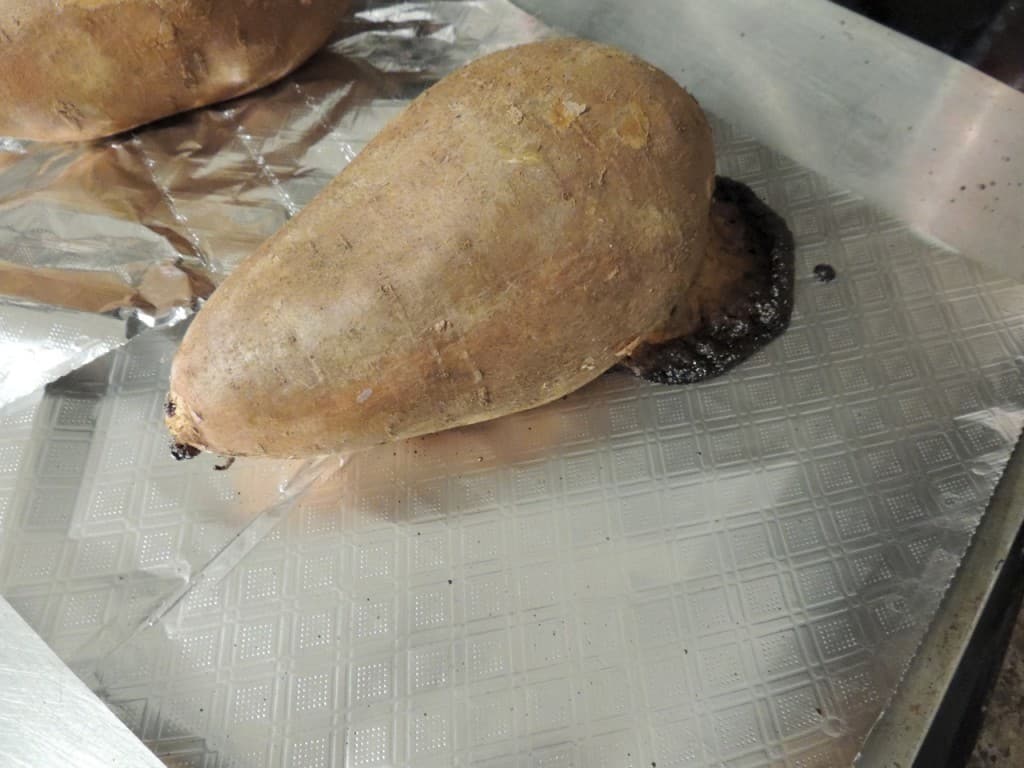 Do I Poke Holes or Add Oils to Sweet Potato?

As you can see one of them weeped, the other did not. Some do say that poking holes in them or coating them in oil prevents this but in my opinion, it is just the luck of the draw. 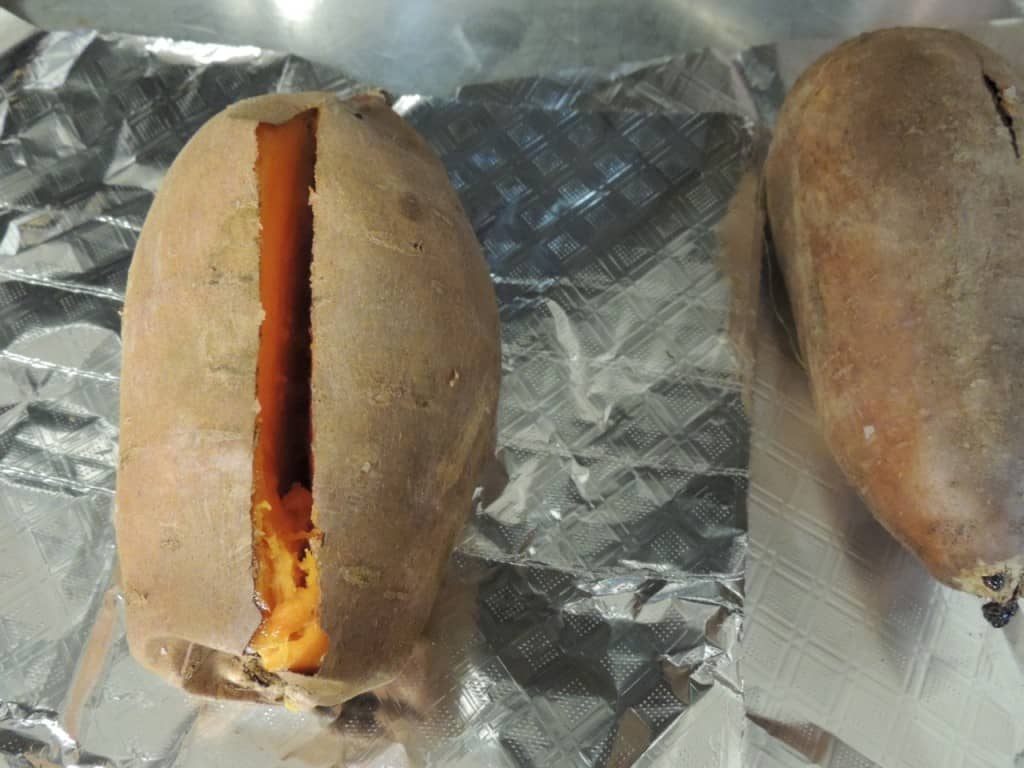 They are soft at this point so a butter knife will do. 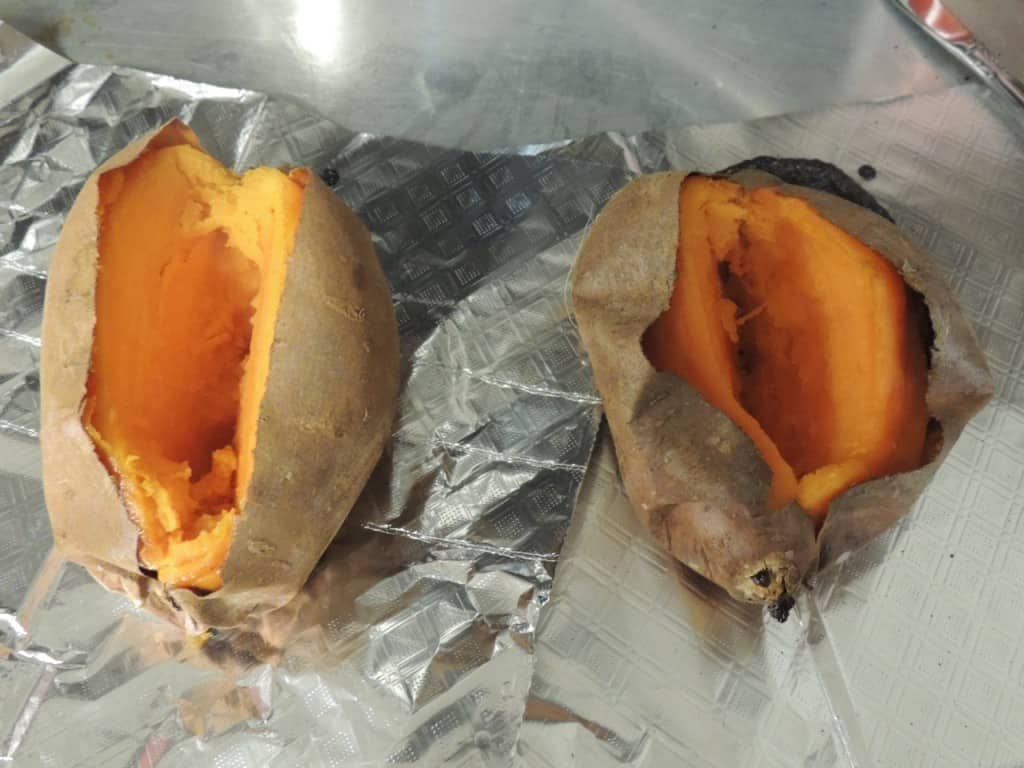 Use a dish towel so you don’t burn yourself or cover your hand with an oven mitt and grab hold of the sweet potato and push both of the ends together towards the center, that causes it to open up like in the picture above. 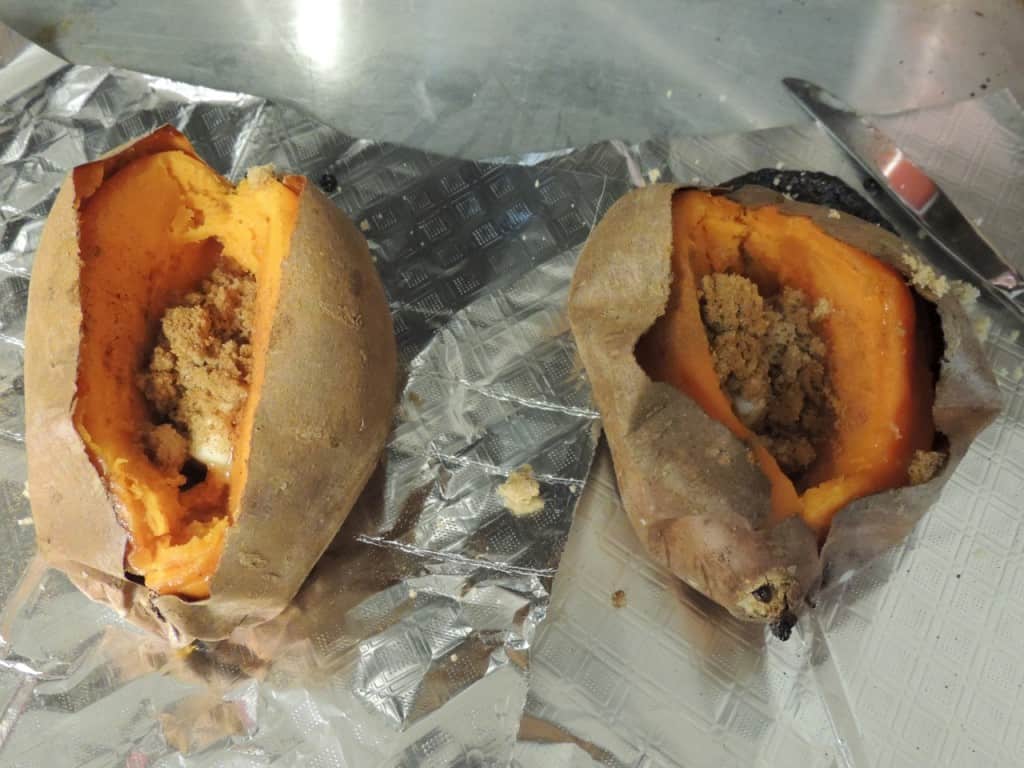 Now they are ready to serve UNLESS You want to top them with toasted marshmallow goodness!

You know you wanna…

(or at least I want you to) 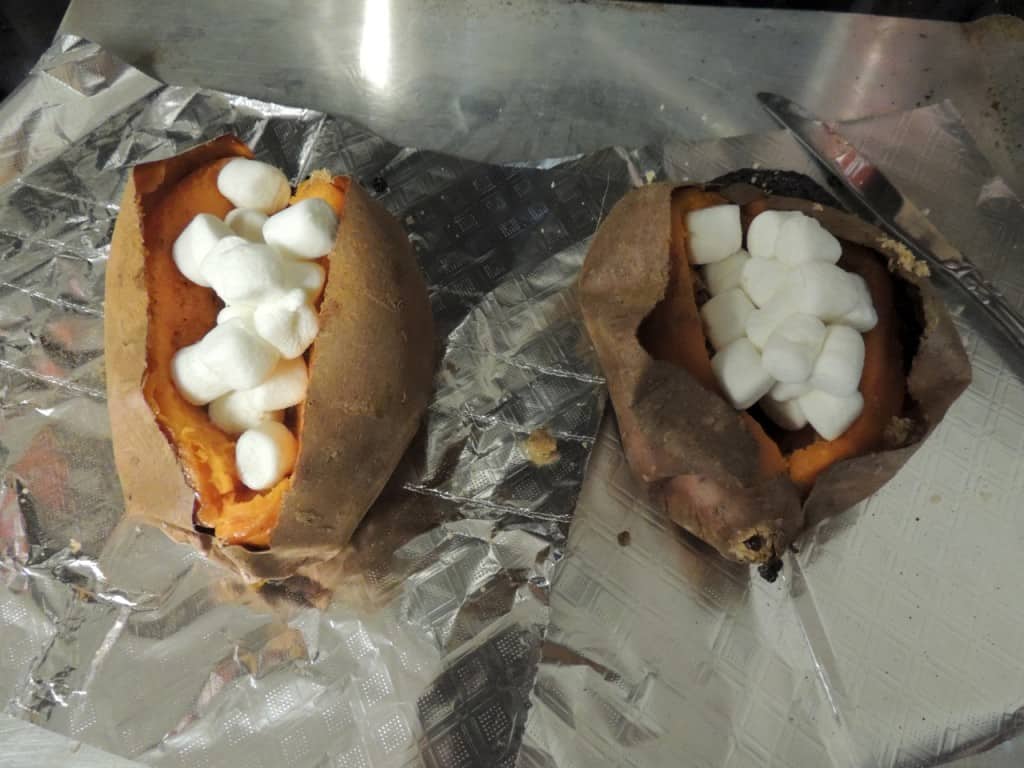 Here’s How You Brown the Marshmallows Faster:

I just turn the broiler on low and keep a close eye on it. If you’ve never cooked anything under your broiler you need to know that it can go from just fine to burned beyond recognition in a matter of minutes so stay right there and keep an eyeball on it. My mother usually cracks her oven door open a little and watches. 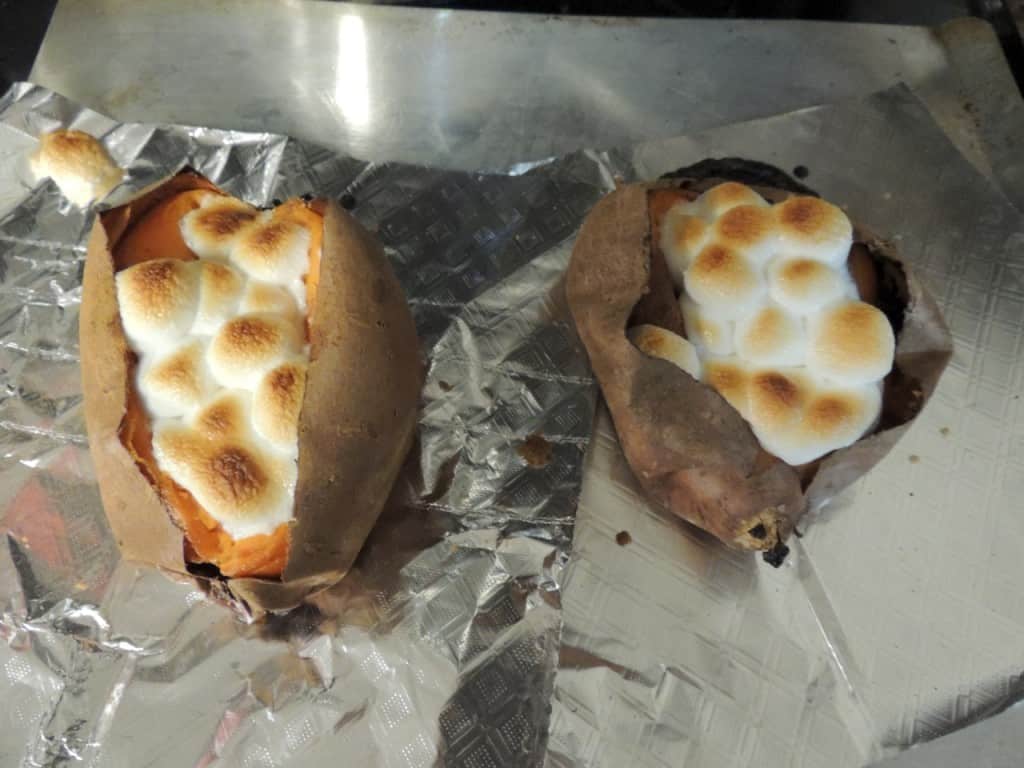 These make a great simple Thanksgiving side dish but I like them any time I can get them!

If you’d like a simple turkey breast recipe that you can cook in your slow cooker to go with this, click here. 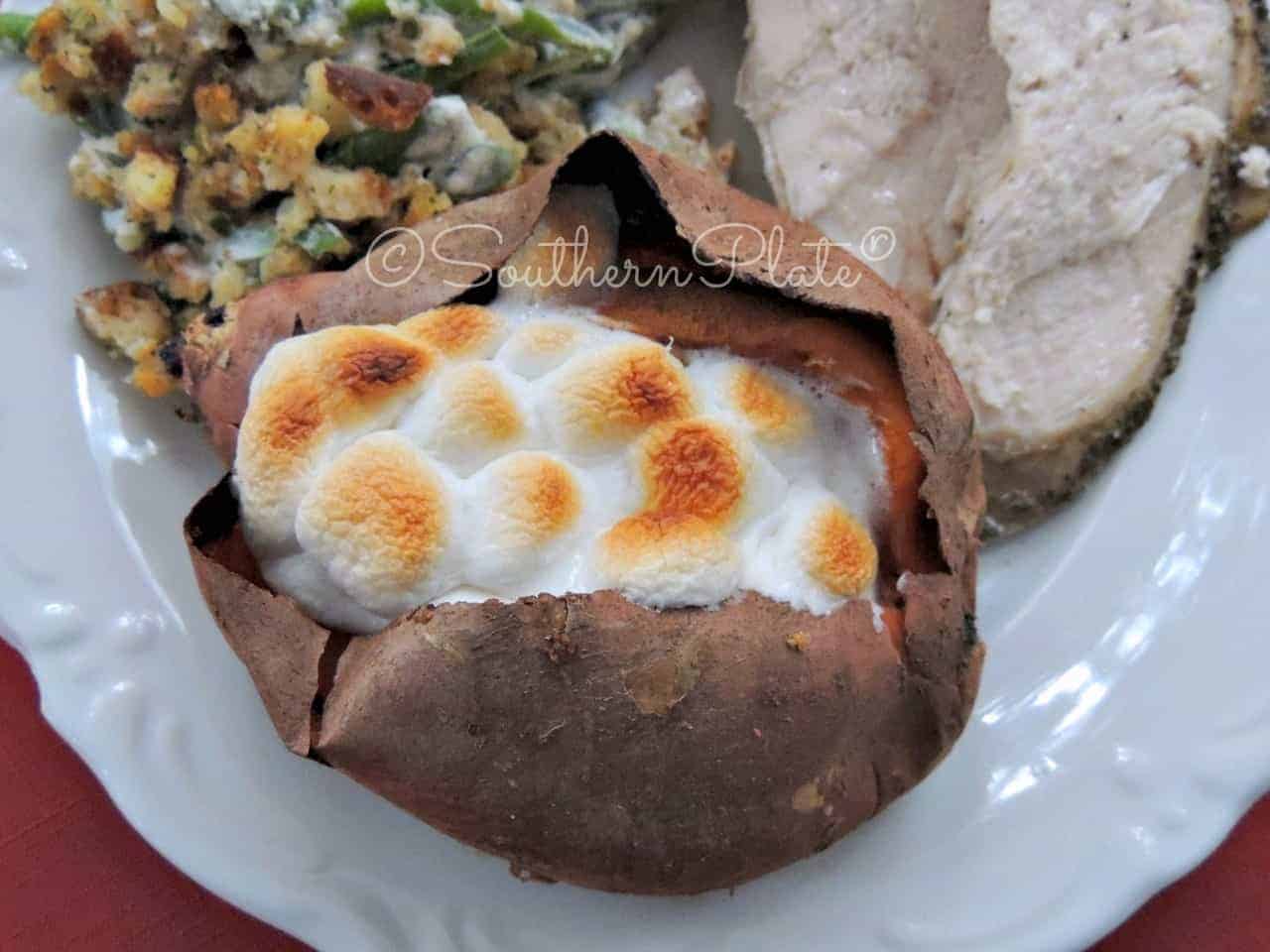 You may also like these other sweet potato recipes: 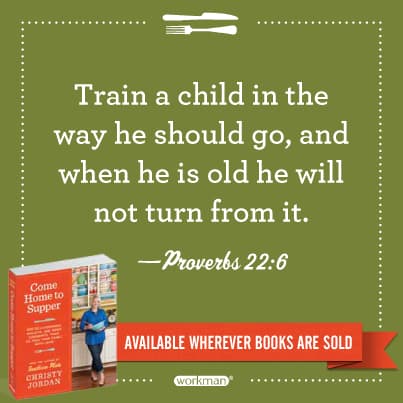 ALL CONTENT PROTECTED UNDER THE DIGITAL MILLENNIUM COPYRIGHT ACT. CONTENT THEFT, EITHER PRINT OR ELECTRONIC, IS A FEDERAL OFFENSE.

PLEASE do not copy recipes and post on your site or use my photos without permission (see above legal notice).

Blogging about recipes and linking to the complete recipe on SouthernPlate.com is welcome and appreciated! 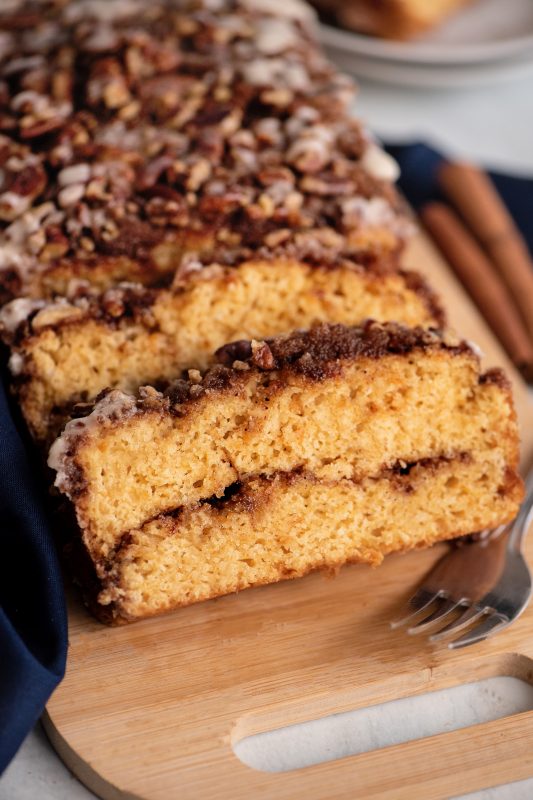 This Scrumptious Sweet Potato Bread Recipe is just the perfect treat.  As you bite into a slice the sweet taste of the bread coupled with the spicy cinnamon flavor are so satisfying.  Feels like home and when its cooking it smells like Fall.

While making my sweet potato dumplings I had some left over sweet potatoes and decided to put this recipe together and boy am I glad I did.

This southern treat freezes extremely well so you can enjoy for a long time to come.  And if you like carrot cake and pumpkin this bread is right for you with its moist cake like texture. 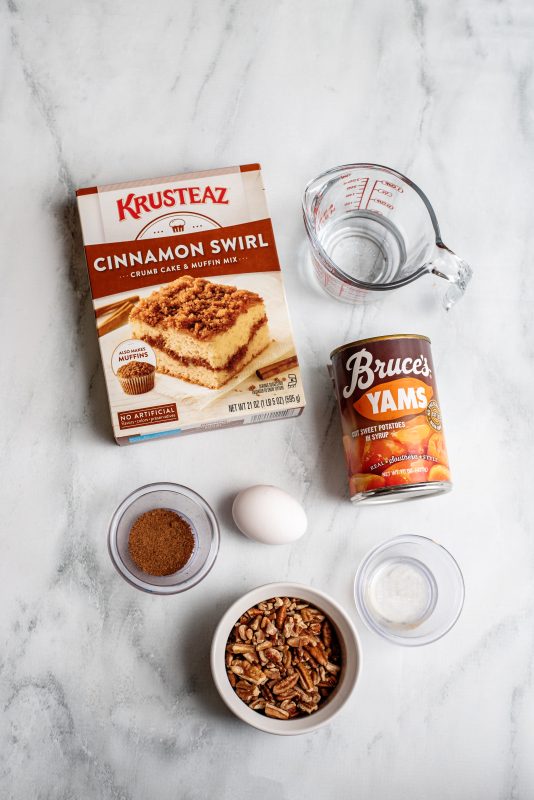 Ingredients for Sweet Potato Bread are:

How to Make Sweet Potato Bread with Cinnamon Swirl 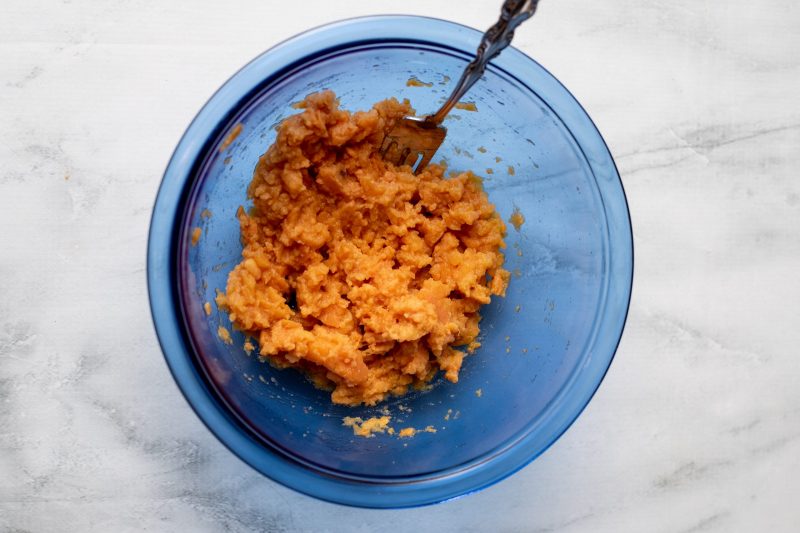 In a large bowl, mash up the yams (sweet potatoes) with a fork until most of the lumps are removed. 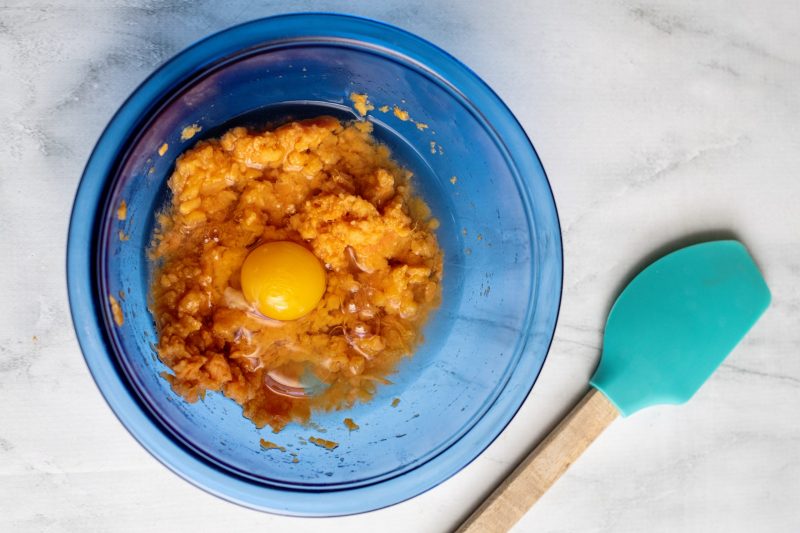 Add in the egg, water, and mix until well combined. 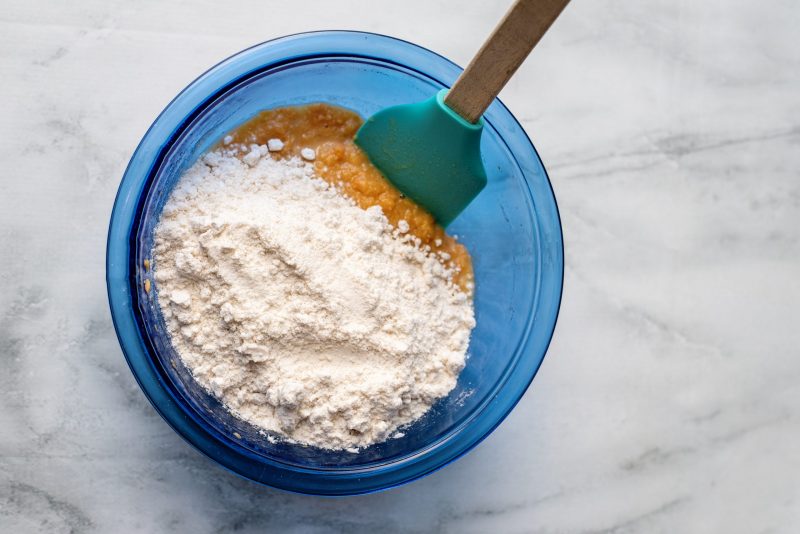 Using a spatula, or hand mixer on low speed, mix in the cake mix until all of the dry crumbs are blended in. Set aside. 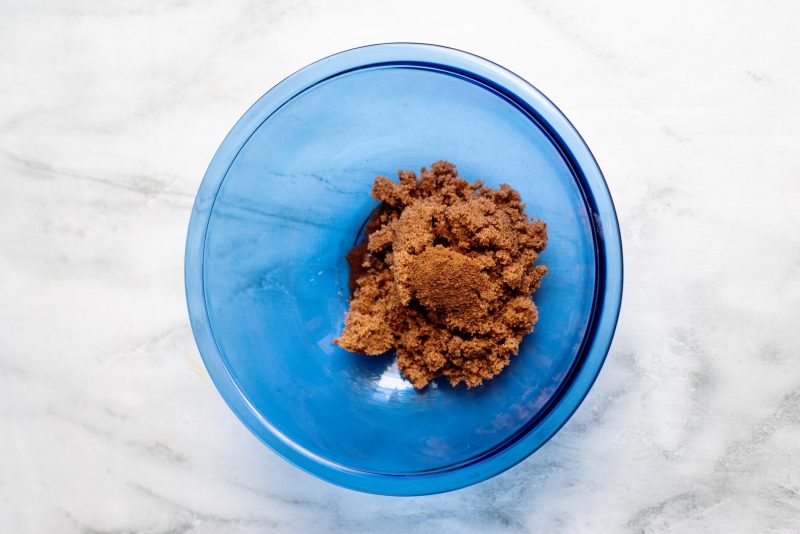 In a small bowl, pour the brown sugar packet that was inside the cake mix box and mix together with the nutmeg. Set aside. 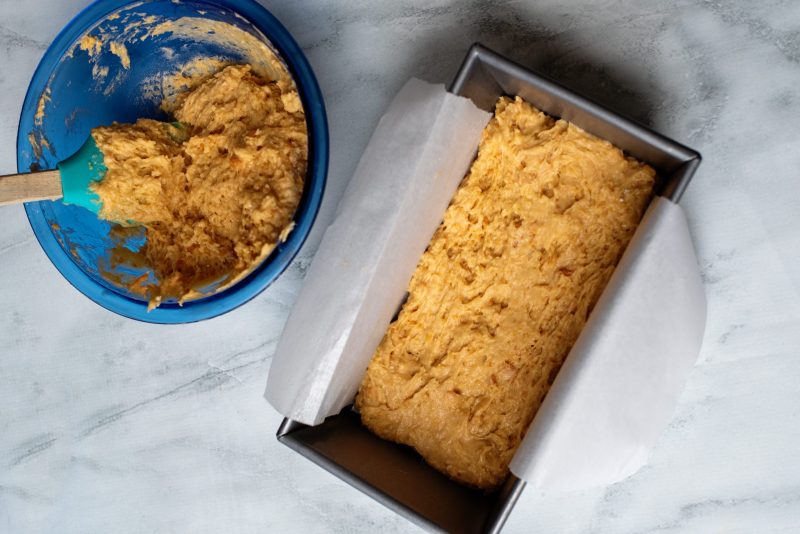 Pour half of the batter into the prepared loaf pan, spreading the batter to the edges. 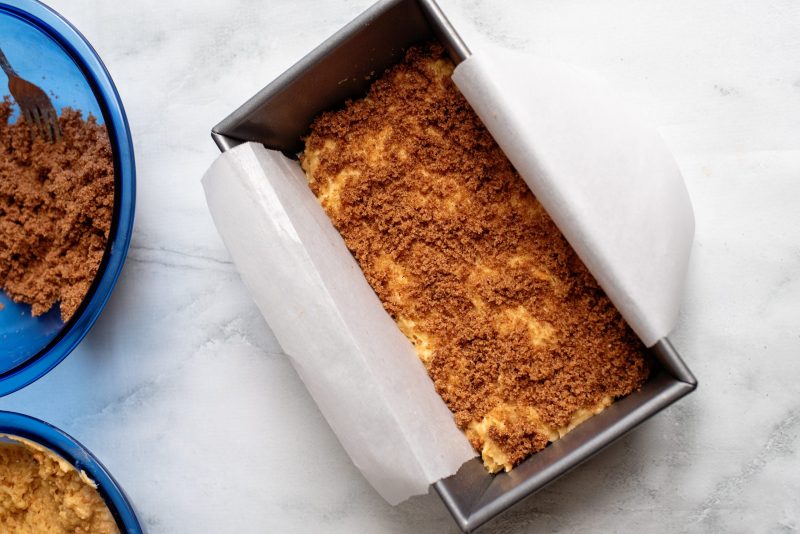 Sprinkle half of the brown sugar mixture over the top. 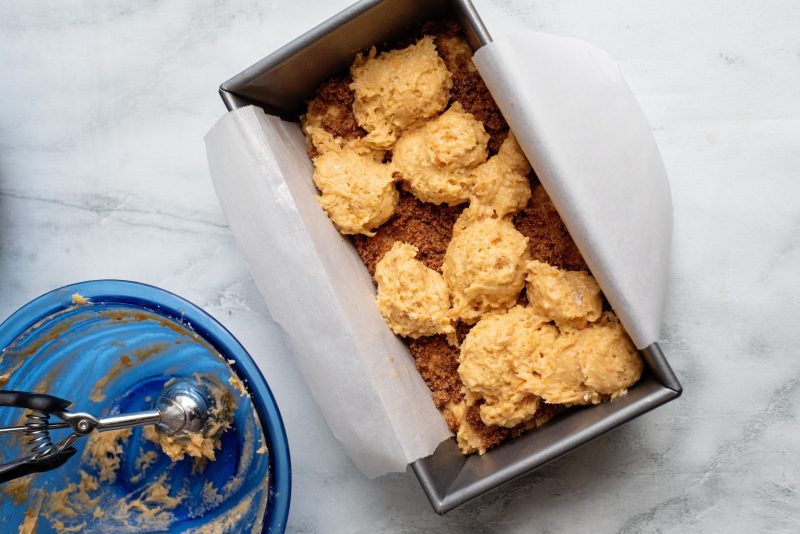 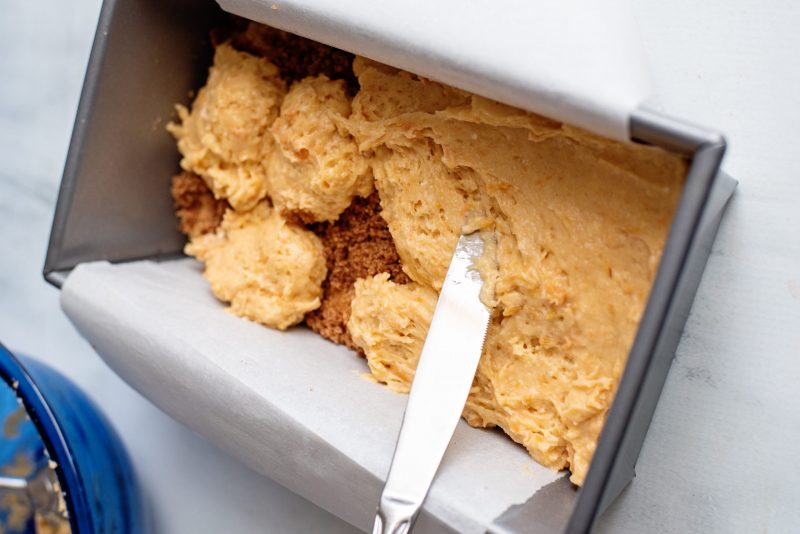 Use a knife to help spread the batter to the edges. 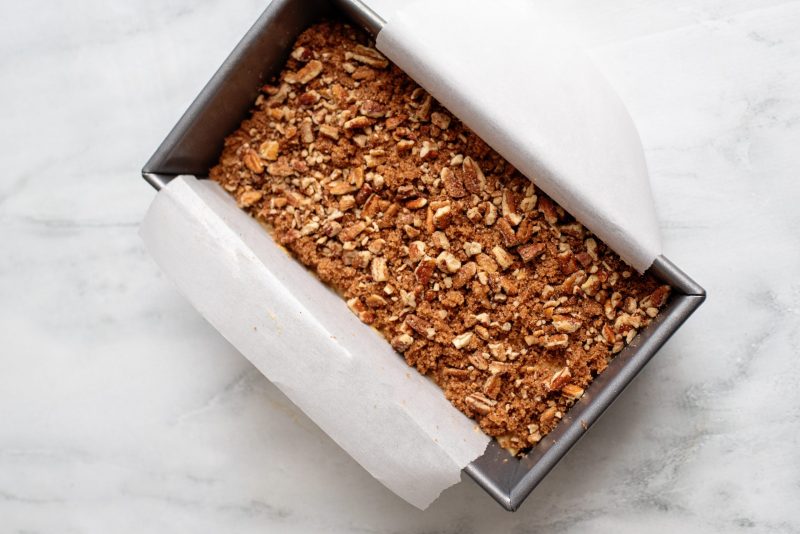 Sprinkle the remaining brown sugar mixture and crushed pecans all over the top. 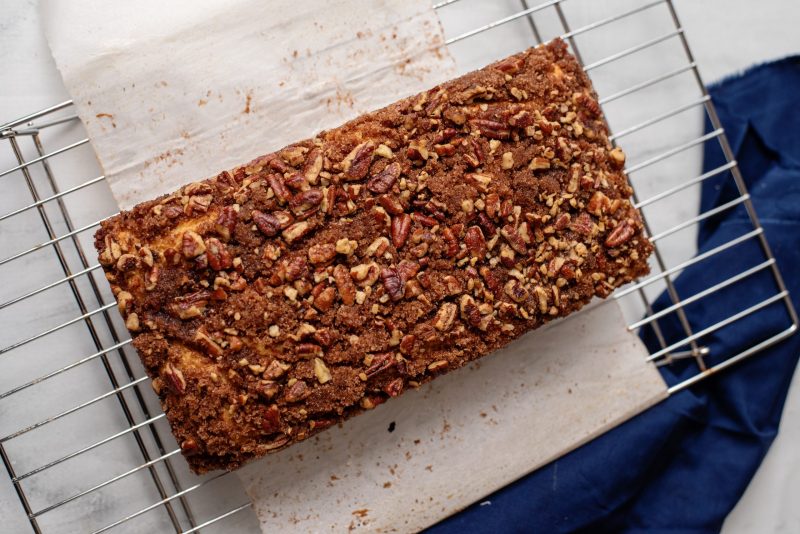 Bake for 45-50 minutes, or until a toothpick is inserted and comes out clean. Cool for 10 minutes in the pan and then move to a cooling rack using the parchment paper liner. 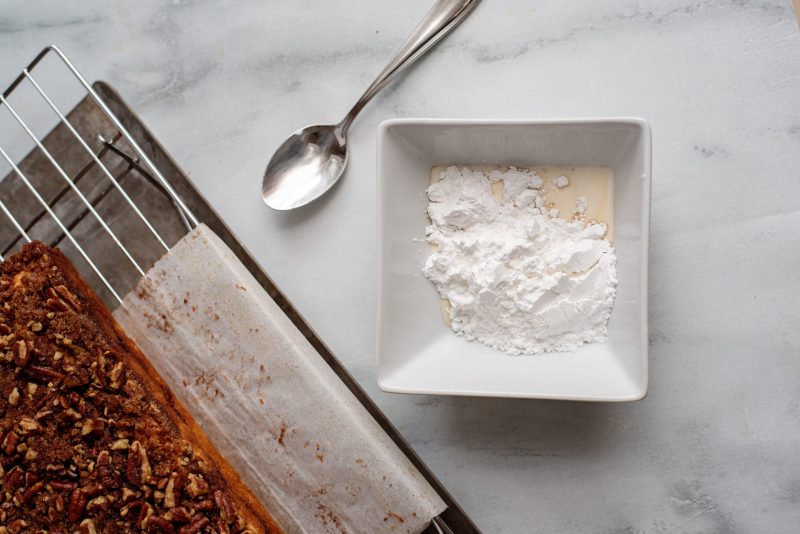 Now if you want to add a little bit extra yum to this recipe then you can add a little powdered sugar glaze on top. 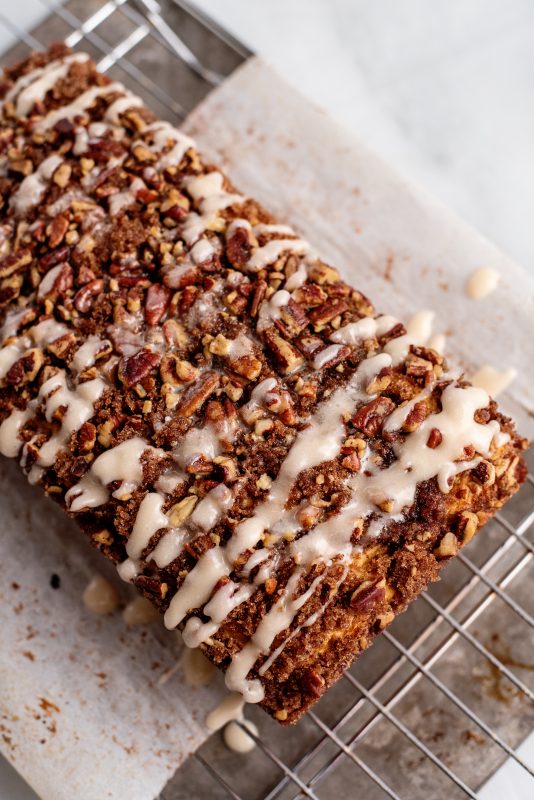 And there you go.  Now it’s time to look like a baking genius to your family and friends.  Mmmm, mmmm good! 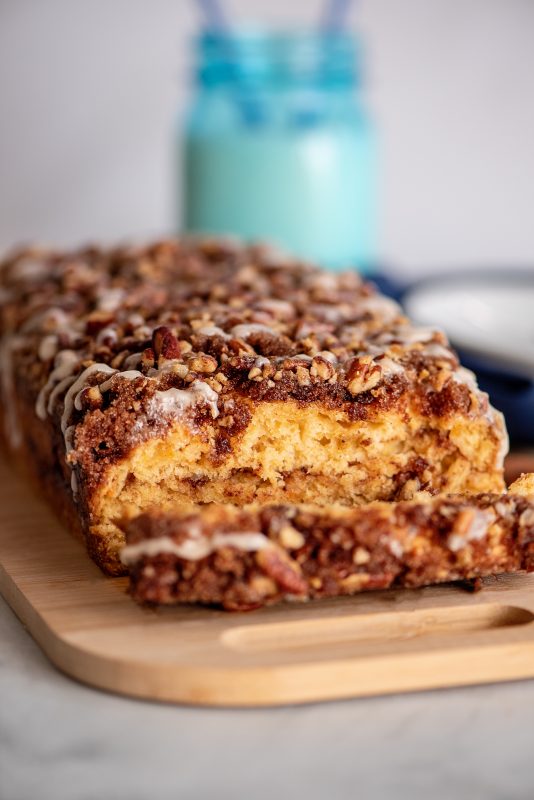 Look at that cinnamon swirl in there! 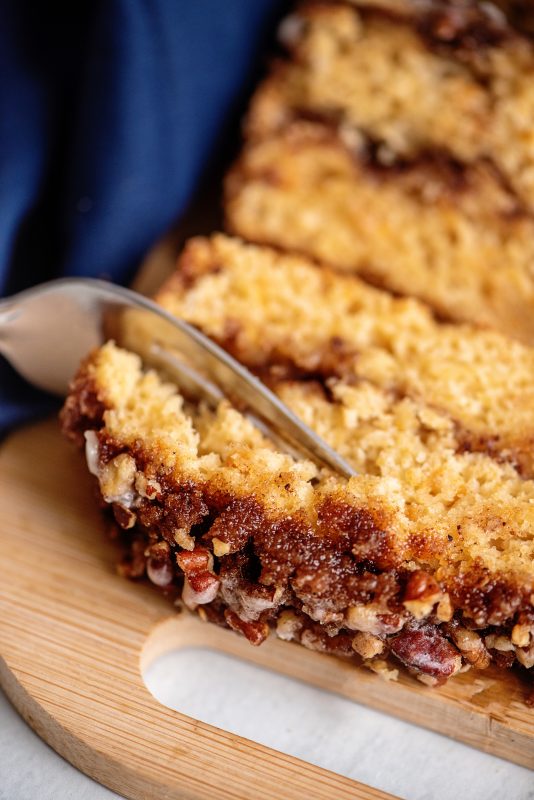 And now enjoy you a slice of the best Sweet Potato Bread with Cinnamon Swirl. 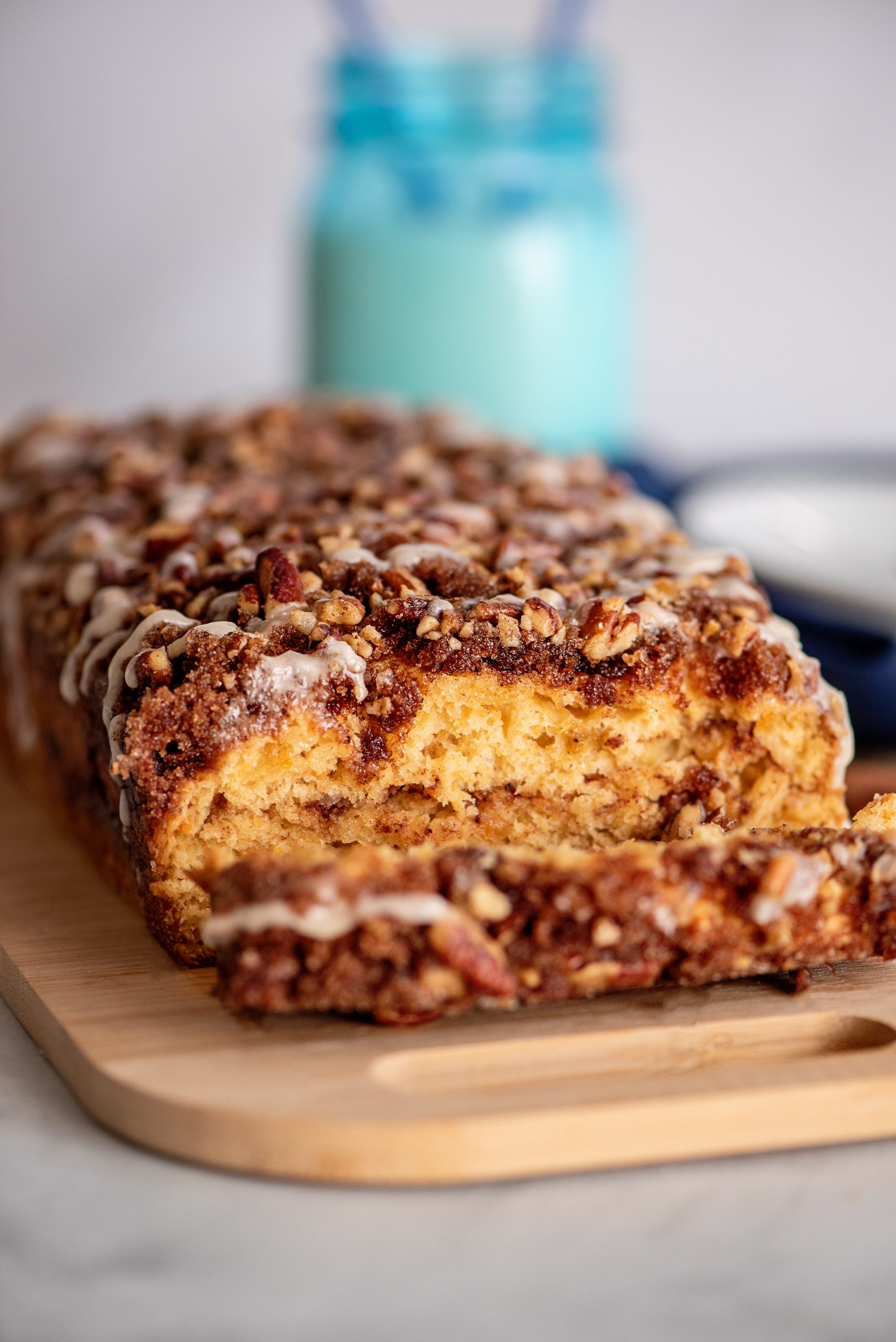 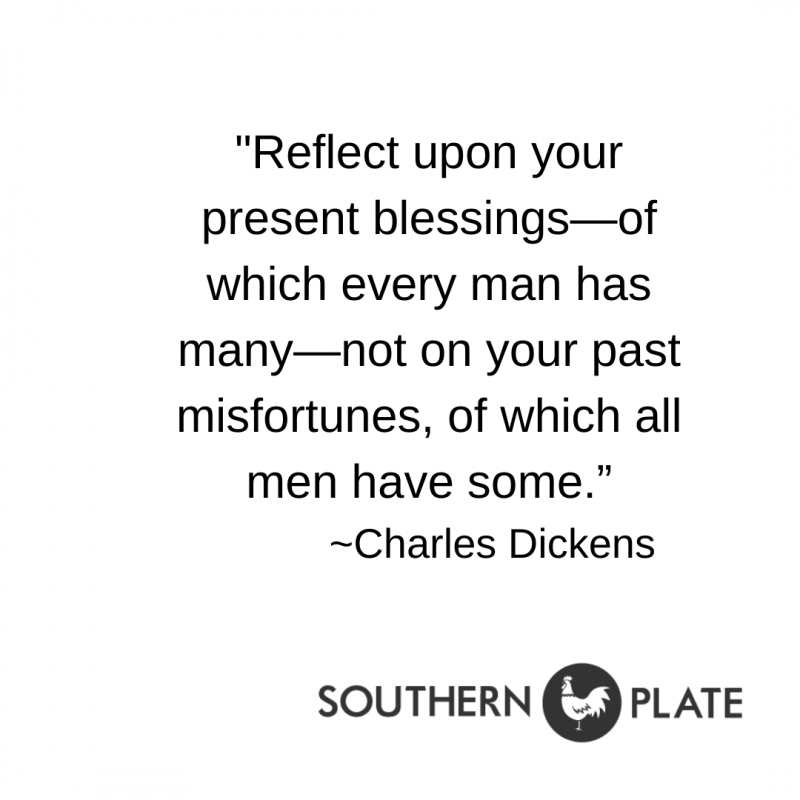